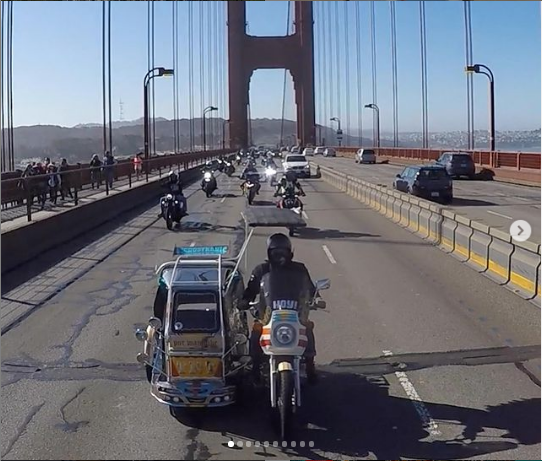 Who would have thought that a Filipino created a Pinoy tricycle in California and it has been making waves on its highways? Yes, it has finally materialized and was proudly made by Pinoys.

According to its social media account, this tricycle named TNT Traysikel is a “mobile public artwork that operates as a cultural marker for the SOMA Pilipinas Cultural Heritage District in San Francisco.”

The vehicle recently made a meet-up with the  Norcal Pinoy Riders and 60 of them showed up, wherein one of its routes was passing through the well-known Golden Gate Bridge. The historical moment was documented. News quickly traveled to the Philippines and it has been shared multiple times; mostly by automobile enthusiast groups.

Some netizens jokingly reacted about the vehicle traversing at the center of the highways of San Francisco.

But wait. The TNT traysikel isn’t just an ordinary automobile we usually spot in our local streets. It is the star of an upcoming web series, “TNT SideCaraoke”; a rolling interview show about Filipinos and the Filipino American experience and a documentary “TNT in America.”

The Pinoy pride was made by artists Michael Arcega and Paolo Asuncion. It was funded by the San Francisco Arts Commission/Individual Artist Commission with additional financial subsidy from Awesome Foundation, San Francisco State University and Balay Kreative.

What do you think of this Philippine entry on the streets of Los Angeles?