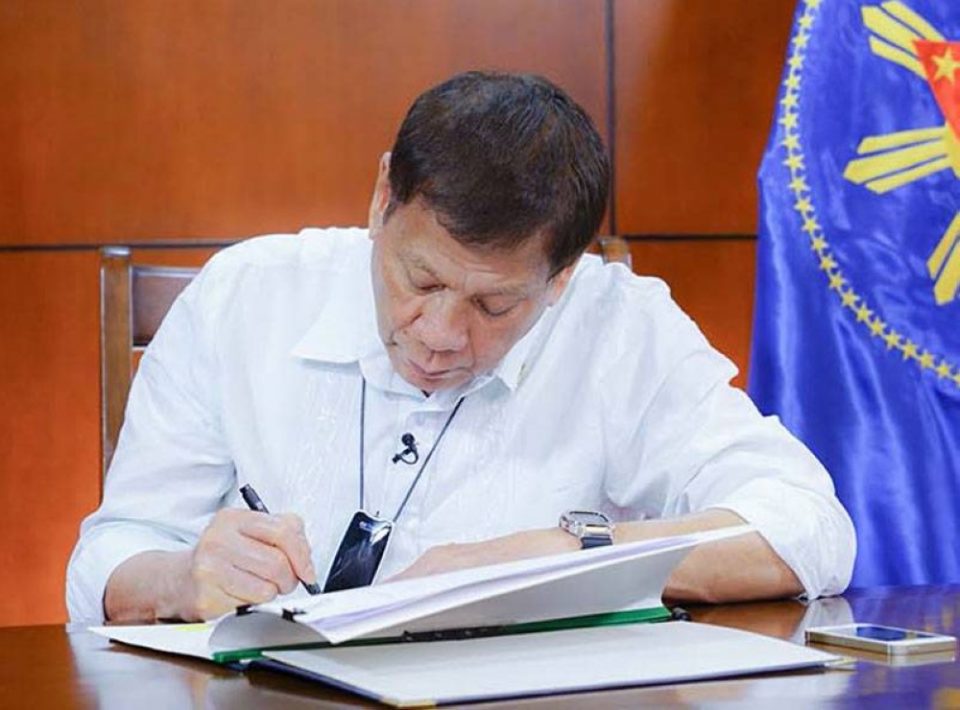 President Rodrigo Duterte has signed into law a measure promoting the rights of deserted or abandoned children with unknown parents and recognizing their status as natural-born citizens.

Under Republic Act (RA) 11767 or the Foundling Recognition and Protection Act, an abandoned child found in the Philippines or in Philippine embassies, consulates, and territories abroad is presumed a natural-born Filipino citizen, regardless of the status or circumstances of birth.

“As a natural-born citizen of the Philippines, a foundling is accorded with rights and protections at the moment of birth equivalent to those belonging to such class of citizens whose citizenship does not need perfection or any further act,” read RA 11767, inked by Duterte on May 6.

The presumption of natural-born status of a foundling may not be impugned in any proceeding unless substantial proof of foreign parentage is shown.

A deserted child shall be acknowledged a natural-born Filipino citizen, even though his birth certificate was simulated, his legal adoption was not processed, or his registration was delayed.

“In the event that the biological parents cannot be identified and located, the foundling shall be declared legally available for adoption, subject to existing laws, rules and regulations and taking into consideration the best interest of the child,” RA 11767 states.

Once the adoption is finalized, the adopted foundling shall be considered the legitimate child of the adopter for all intents and purposes.

The adopted foundling, according to RA 11767, is also entitled to the rights and obligations provided by law to legitimate children born to them without discrimination of any kind.

Senator Grace Poe thanked her fellow lawmakers and President Duterte for the law as she recalled that her status as an adopted child was raised when she ran for the presidency in 2016.

Poe said that period opened her eyes to the necessity of the law, saying foundlings are subjected to undue scrutiny for something that is completely outside their control.

“It has made me realize that ample safeguards must be institutionalized to protect them from future attacks and declare, once and for all, that they are Filipinos who must be accorded with the same rights and privileges that are granted upon their fellow countrymen,” she said in a statement on Tuesday.

“In 2013, when I ran for senator, it was already a subject of a legal discussion, whether my being a senator was legal because of the supposed uncertainty as a natural-born citizen. Imagine the hurt of thousands of Filipinos who do not know who their biological parents are,” she added.

She called RA 11767 a victory for adopted children and adoptive parents.

“May it provide them with the peace of mind and closure that some of them seek until this very day. May it also remind them that regardless of where they came from, they are just as important and worthy as anybody else,” said Poe, who was raised by the late actor Fernando Poe Jr. and his actress-wife, Susan Roces.

Senator Risa Hontiveros, the principal author of Senate Bill 2233 which became RA 11767, said Poe’s case hounded her but her utmost motivation was the best interest of children who are deprived not just of a family but of the right to have a name, nationality, and access to government programs and services.

The National Authority for Child Care (NACC), Local Social Welfare and Development Office (LSWDO), and any accredited child-caring or child-placing agency shall ensure that foundlings are accorded with alternative childcare options, which include “kinship care, foster care, or even residential care, consistent with existing laws, while the search and inquiry into the facts of birth and parentage of the foundling is ongoing”.

A foundling shall also be granted available government program or service such as registration, facilitation of documents for adoption, education, legal and police protection, proper nourishment and medical care for survival and development, and admission to safe and secure child centers.

The NACC, through the Regional Alternative Child Care Office, shall conduct a proactive and diligent search and inquiry into the facts of birth and parentage of the foundling, within 15 days after commitment or submission of the affidavit of the finder or other concerned person, or after the information that there is a probable foundling.

An affidavit of the finder, certification of the village captain or police authority on the foundling’s discovery, and NACC’s report must be submitted to register the foundling with the Local Civil Registrar, according to RA 11767.

The biological parents, the NACC or the LSWDO may file a petition for the revocation of the certificate of live birth before the Local Civil Registrar, if the parentage of the foundling has been established or if there is a fraud to conceal the material facts of birth or parentage of the person that would otherwise not render the person as a foundling.

“The biological parent/s or legal guardian of a foundling may petition the NACC to recover the legal custody and restore parental authority over the child,” the law read.

The law also contains a provision for a “Safe Haven” provider that is tasked to take care of the infant.

To develop and implement more responsive policies, plans and programs for foundlings, regular and synchronized data collection shall be conducted by local government units in coordination with the Philippine Statistics Authority, NACC, and other relevant stakeholders.

All benefits provided under RA 11767 shall also apply to foundlings duly registered during their childhood but have reached the age of majority without benefitting from the adoption process.